"Dynamic vibrant and sustainable communities need creative people working together, assets to support their aspirations and agencies and local people collaborating to an agreed plan. All three are needed." www.carnegietrust.org.uk 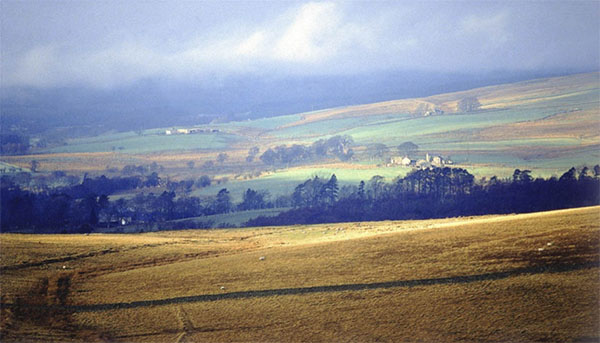 Tarset 2050 is a community interest company, comprised of directors and a company secretary who work solely as volunteers. It has never had any paid staff.

How it all started

In 2006 many remote rural areas were under threat, and there was a recognition that communities needed to try to shape their own sustainable future. Tarset 2050 started by running several facilitated days for the community with the aim of defining a vision for Tarset’s future.

Sustainability is about economic, social and environmental survival. A small voluntary group undertook to try to develop some of the ideas suggested and set about applying for the necessary funding. Tarset 2050 CIC was incorporated in 2007. Its core belief is that an integrated, rather than a single project, approach to sustainability is essential.

It received early support for a wide range of projects from Tynedale District Council Regeneration Department, The Northern Rock Foundation, The Community Foundation for Tyne and Wear and the Northumberland National Park Authority.

Anything to do with the protection and recording of our environment and cultural heritage is delegated to the Tarset Archive Group, which had been set up in 2003.

Planning permission was granted for a micro-hydro project in 2009 by the Northumberland National Park Authority. The proposed site for this was at Burnmouth Mill.

The scheme had been extensively researched and developed after the community put forward renewable energy ideas. The plan was to sell power to the grid and use the money raised for community benefit.

All funding for the investigations, build-design and planning application was raised by Tarset 2050 from the Community Foundation, Tynedale District Council and the Sustainable Development Fund run by Northumberland National Park.

The micro-hydro pilot project planning application was summarised on the Northumberland National Park planning website as:

Burnmouth Mill, Tarset Re-instatement of c19th overhead water wheel to generate electricity to be fed into the grid, with associated intake and screen, penstock, stone wheelhouse and masonry tailrace, control mechanism and connection to grid

and featured in an article in the Journal: Tarset waterwheel project aims to raise cash, 11th June 2009.

The project unfortunately had to be discontinued not long after, due to unforeseen and insuperable site problems. 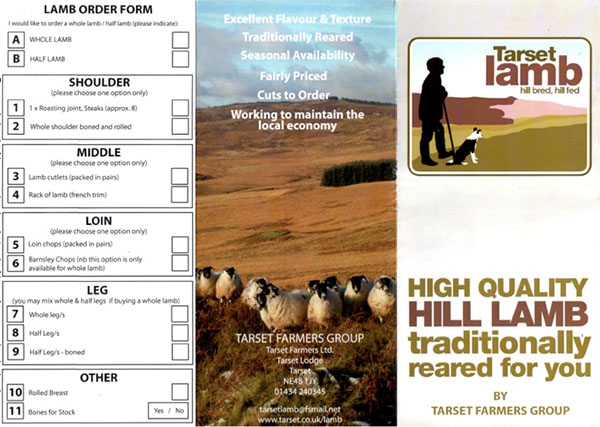 Tarset 2050 worked to develop a Tarset Farmers Group to maximise markets for local hill lamb, and with it ran a pilot scheme between 2007 and 2009.

Development included market research funded by the Prince’s Trust, following Prince Charles’s visit to Tarset and the North Tyne valley in 2007, organised by Business in the Community, as part of its Seeing is Believing project.

Farmers have been on visits to ‘best-practice’ examples of projects in Derbyshire and Devon.

Tarset 2050 funded and commissioned a report on the potential for specialist tourism in the area with the aim of boosting the local economy.

It raised funding to support a pilot for a specialist event, The Tarset Bastle Weekend, which it ran with the Tarset Archive Group.

TAG drew on much of its recent research to mount an accompanying exhibition.

Explorations of potential for a local wood fuel business, and extensive research on other uses for wool, e.g. as packaging for a local business.

Timeline of main events run and sponsored by Tarset 2050 CIC, often in partnership with other community groups

Photographs: (from left) Pie Poster, designed by Imi Maufe, VARC artist in residence; some of the 98 entries waiting to be judging; Judging the Pie of Pies class, The Pie King, Simon King, and friend, with MC, Michael Walton and Alistair Murray for Tarset 2050(images courtesy of Simon Fraser ©) 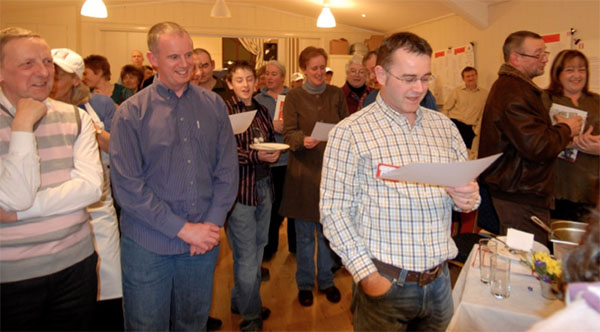 Photograph: After the prize giving, the community and judges join in a rousing rendition of The Pie Anthem - words by Michael Money to the tune of God Save the Queen (images courtesy of Simon Fraser ©)

2011 Wool Matters Day - exploring spinning, weaving and dyeing (the fore-runner for the Wool Gathering group set up in 2013)

Photographs: Trying his hand at spinning, Leo (VARC artist in residence); Having a go at wool carding

Grants for training and other enterprises

Tarset 2050 has helped people find grant-aid for training to improve their work prospects.

It is still able to offer small grants to individuals and community groups. Application is by letter to the Company Secretary.