Tarset agricultural land is predominantly allocated to hill farming of sheep and cattle, but there are also significant forested areas.

Most of the land is not very fertile and combined with the relatively high altitude, it is considered severely disadvantaged land. Sheep breeds including Blackface, Swale and Mule. Traditional hardy hill breeds of cattle such as Galloways, Blue Greys, Luings and their respective crosses can be found on some of the harder, higher ground in Tarset with continentals and their crosses such as Limousin (a favourite sire), Simmental, and even some Belgian Blues, running on the kinder ground.

The farming calendar describes typical activities throughout the year. But for what's really going on, read the Shepherd's Blog (no longer updated).

Some of the fields are not fenced, and some of the livestock are adventurous, so you might meet lambs, sheep, cattle, ponies and a few collie dogs on the roads. During the winter, sheep and cattle require feeding, so the roads may also be muddy (therefore slippery) depending on the weather conditions. See also further advice for visitors about stock movements and dogs. 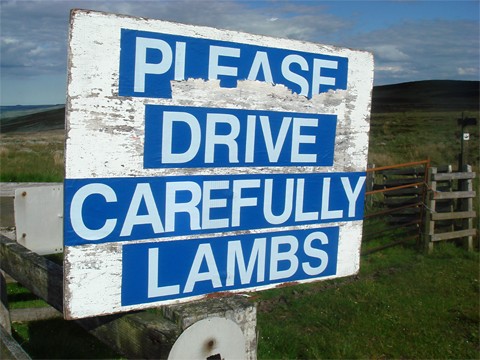 Photograph: One of the hand-made signs alerting drivers to the danger to lambs