This is Walk 1 in a series of seven. It is about 2½ miles (4km) long, part of it on metalled roadway and part across rough ground and pasture.

The section prior to Thorneyburn Lodge passes across unfenced grazing land, and as a result, there may be sheep and cattle near or on the path. If so, please adopt a calm but purposeful approach and the animals will move out of your way. Avoid acting in any way that would cause the animals to stampede, particularly in lambing season, as this could damage the animal.

Thank you, please enjoy your walk.

Produced with the invaluable assistance of: Northumberland National Park Authority. 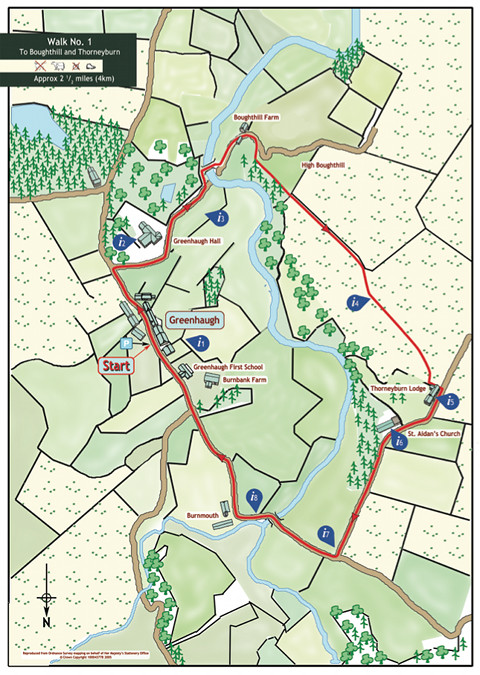 As indicated with blue "i" markers on the map.

The starting point for these walks, is a small hamlet beside the Tarset Burn. The name derives from the Northumbrian word "Haugh", an area of flat land beside a river or in the bottom of a valley.

In medieval times, the village served the drove road that originally ran through it, linking farms in England with markets across the border. As a thriving community, Greenhaugh was home to several businesses, including a cobbler, a tailor, a village shop, a blacksmith and a Post Office. Sadly, none of these still exist.

The centre of the village was then, and still is, the Holly Bush Inn. This is the oldest building in the village dating as it does from 1650. It boasts the reputation, amongst other things, of being the only public house in the North Tyne Valley to not run out of beer during the second world war! Up to the commencement of the Second World War, the majority of the villagers were employed on two local estates; those of Greenhaugh Hall and the huge Sidwood Estate.

Greenhaugh Hall was built by the Spencer family who had extensive interests in iron and steel making at Lemington, near Newcastle. Initially it was built as a shooting lodge, in 1861. In 1912 it was extended to become their full-time home. It was then sold in 1984. Since then it has had a chequered career until the present owners bought it in 1995.

The field to the right of the footpath, know locally as "The Bog", has been classified as a Sight of Special Scientific Interest (SSSI).  It is one of a small number of species-rich northern hay meadows remaining in the country. Modern farming methods require meadows to be cut several times a year, and thus natural meadow flowers do not get the chance to flower and set seed. These old hay meadows are left un-cut until after 20th July when all the indigenous flowers have set seed, thus maintaining flora that otherwise would be lost. One species of particular importance is the Northern Marsh Orchid (Actylorhiza purpurella) which blooms in June and July.

The existing Boughthill Farm is a relatively recent building (18th century), but the original farm is thought to have been a bastle or fortified farmhouse, which was razed to the ground during the reign of Elizabeth 1st. Bastles are peculiar to the border region being somewhat similar to pele towers, as they offered farmers protection against the wild bands of marauding bandits known as the Border Reivers. The bastle enabled the farmer to corral and protect his animals on the ground floor, whilst he and his family retreated to the upper floor to be secure behind a huge barred door. The heat from the animals below served as underfloor heating to the family above!

This building, now a private dwelling, was a school and school-masters house for over 100 years until 1966, when a new school was built just outside Greenhaugh.

This, the local Parish Church, was built circa 1820. It, and its twin at Greysteads, were built upon land donated by the Commissioners of Greenwich Hospital. Its small graveyard contain the graves some of the mighty families that ruled by violence in the dark Reiver's days, names such as Robson, Hedley and Millburn.

Over the wall on the right hand side of the road is an old sheep dip. Sheep are dipped to rid their fleeces of skin parasites that would otherwise cause severe damage.

This pretty waterfall, or linn, is a particularly spectacular place towards the end of November and the beginning of December when salmon and sea trout have to jump its fall to return to their spawning grounds in the gravel beds at the head of the Tarret.

The last thirty years have seen a dramatic change in the River Tyne and its tributaries. Whereas previously the Tyne was so badly polluted that it could hardly sustain any migrant fish, a large programme of effluent control and a raft of anti-pollution measures down stream have transformed the water quality.

This, together with Northumberland Water's highly successful salmon hatchery at Kielder village, has resulted in the Tyne being acknowledged as England's best salmon and sea trout river.